This is the daddy of all off-road races: the Mexican 1000. It started exactly 50 years ago by the National Off-Road Racing Association, the first sanctioning body dedicated to off road racing. The first event began in Tijuana and finished in La Paz, while this 50th Anniversary running would start in Ensenada and finish in San Jose del Cabo 1,264.10 miles down the peninisula. After leaving Ensenada, racers passed through San Felipe, Bay of Los Angeles, Loreto,  and then La Paz before the dash to the finish. Start to finish took five days, if you were lucky enough to make it.

Extra-credit reading and videos below the photos.

Then the Shinola hit the Westinghouse. The #250 drove into a Grand Canyon-sized rain rut which hurdled them off the road, breaking tie rods and the rack-and-pinon steering. One of the #250’s rescue trucks hit a cavernous pothole on Highway 1, which fatally damaged its steering. At 10:30 pm, we received a text from Zak asking us to help in the rescue effort — we were looking at a four-hour commute to the Pacific side of the peninsula. Meanwhile, only minutes before the start in Loreto, the #55’s starter failed causing a one-hour delay in starting the race, knocking Zak from around fifth place to near 25th.

A mile from the finish, the driver’s-side rear brake caught on fire, and neither Zak or Josh were aware of it until they arrived on the podium and a hundred guys came running at them with fire extinguishers. The COPS Racing #55 finished sixth in class and 15th overall.

Cameron Steele cinched the overall win in his Geiser Trophy Truck — congratulations to all!

The race is over, so Friday morning we all pack up and start the trek back north — it will take three full days of driving to get home.

With its roots from 1967, the 2016 edition of the NORRA Mexican 1000 Off Road Race ran 1374 miles down the Baja peninsula, starting in Ensenada with the checkered flag in San Jose del Cabo. The four-day event represents six eras of race cars, defined primarily by the technology available when originally introduced. Each era will be awarded an overall trophy.

One hundred twenty-four racers will begin their journey down the peninsula in Ensenada, advancing each day to the Bay of Los Angeles; then Loreto; then the capital city of Baja California Sur, La Paz, and finally the finish in San Jose del Cabo.

COPS Racing entered two Spec Trophy Trucks in the race: the E/S Motorsports #29 driven by Zak Langley, and the #250 Brenthel-built truck driven by John Langley — both trucks are in the Evolution Unlimited Class for contemporary race cars.

Contingency Row gives race fans a down-and-dirty, close-up view of the racers and race cars in an almost a carnival-like atmosphere. The pre-race event is held the day before the race in front of the historic Riviera Convention Center and gives racers one last chance to solicit help from sponsors before the race. At the end of Contingency Row, race cars pass through Technical Inspection, to verify the race car is rules-compliant and safe to race. 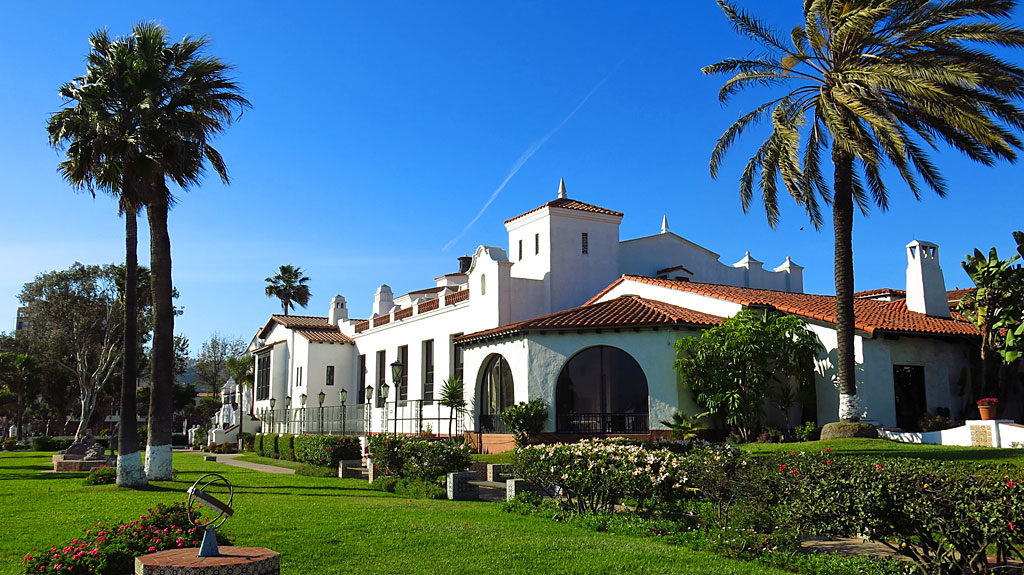 COPS staged at 6 a.m for the 7 a.m. start of the 1374 mile race. After departing Ensenada, racers will log 456 miles before seeing the day’s finish in the Bay of Los Angeles on the east side of Baja.

We have to assume the cars started OK in Loreto — the four of us, with broken race truck in tow head south to meet the race in progress. The sunrise was quite spectacular.

A photo sphere of the Misión de Nuestra Señora de Loreto Conchó  which was founded on October 25, 1697 — the first of the California Missions.

A photo sphere taken at Microondas Tiburón — Bahía Concepción to the south and Mulegé to the north.

Our excuse to be in San Felipe was to attend Hobie Cat’s Midwinters West Regatta. With the exception of a 30-minute chubasco, the weather was perfect. This photo was taken from Highway 5, Camino del Sur, south of town, before there were houses in the area. Here’s what a near-by location looks like in 2009 in Google Street View. 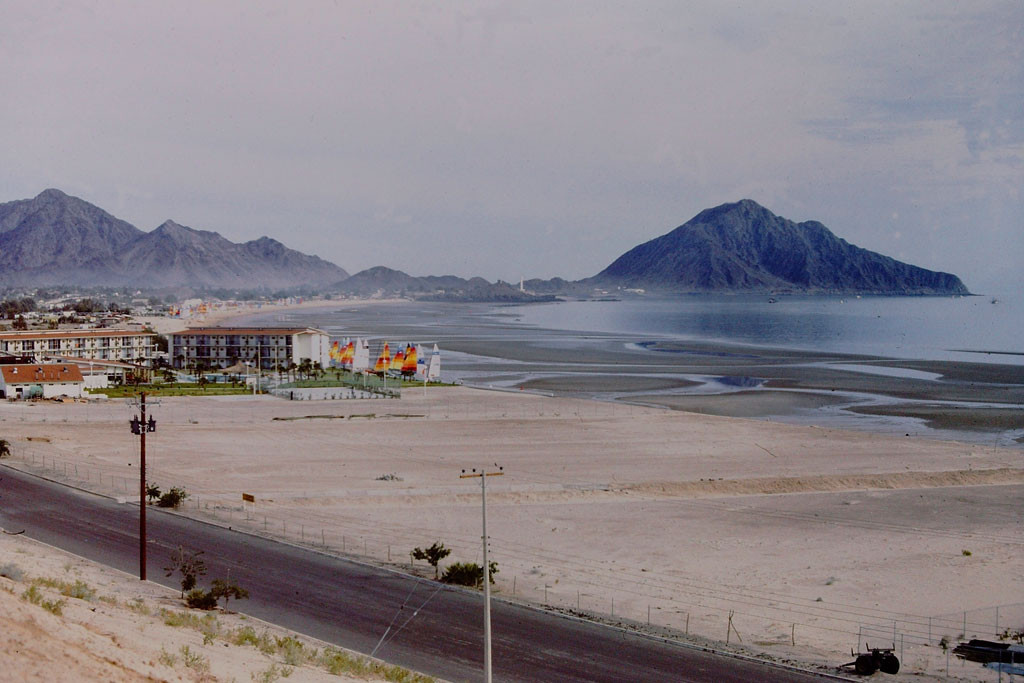 This is the largest vehicle I’ve ever seen in my life.

I met this American resident of San Felipe one Sunday afternoon on top of the dunes behind town. He was driving a 1950 Chrysler Crown Imperial limo which he’d dropped onto a Chevy Silverado 4×4 frame (the frame had to be lengthened by three feet).

COPS Racing pits near RM234, next to our pals at Checkers. COPS experienced good fortune at the 250, and both the Trophy Truck and Class 10 were merely drive-bys at our location. 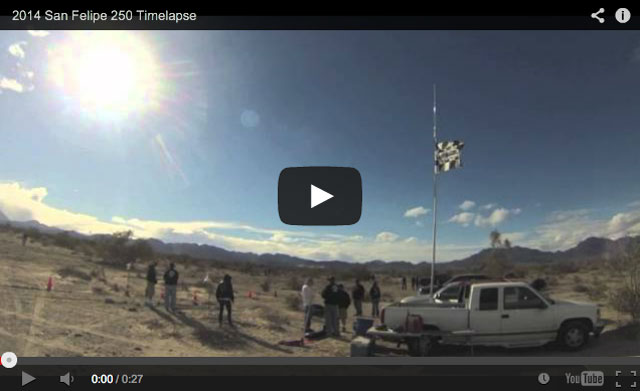 In the Rio Colorado flood plain/delta, right about here. Click to really embiggen (3.7MB) and see the 180˚ panorama.

The road from Punta Blanca to Laguna Chapala in Baja is a fun drive with plenty of rocks and silt. The 30-mile road took three hours to traverse, including pausing-and-reflecting time. 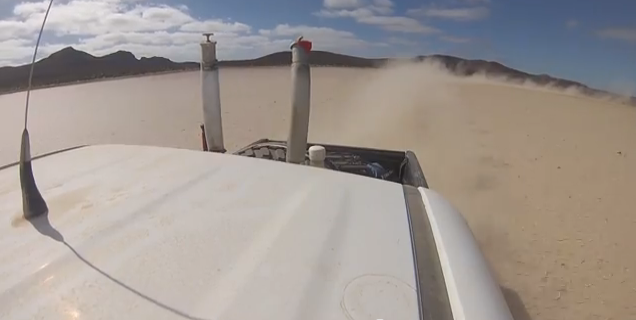 “A Boeing 727 passenger jet has been deliberately crash-landed in a remote and uninhabited Mexican desert as part of a scientific experiment for an unprecedented international television documentary for Discovery Channel, Channel 4 in the UK, plus Pro Sieben in Germany.” Read more …

Now, a year later, the crashed 727 is being stored in a dirt lot south of Mexicali. 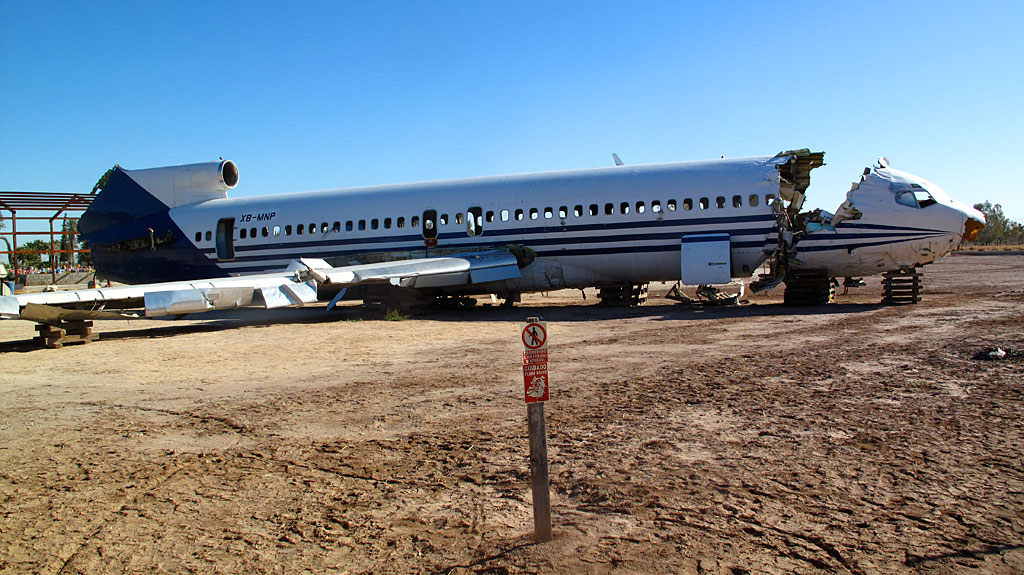 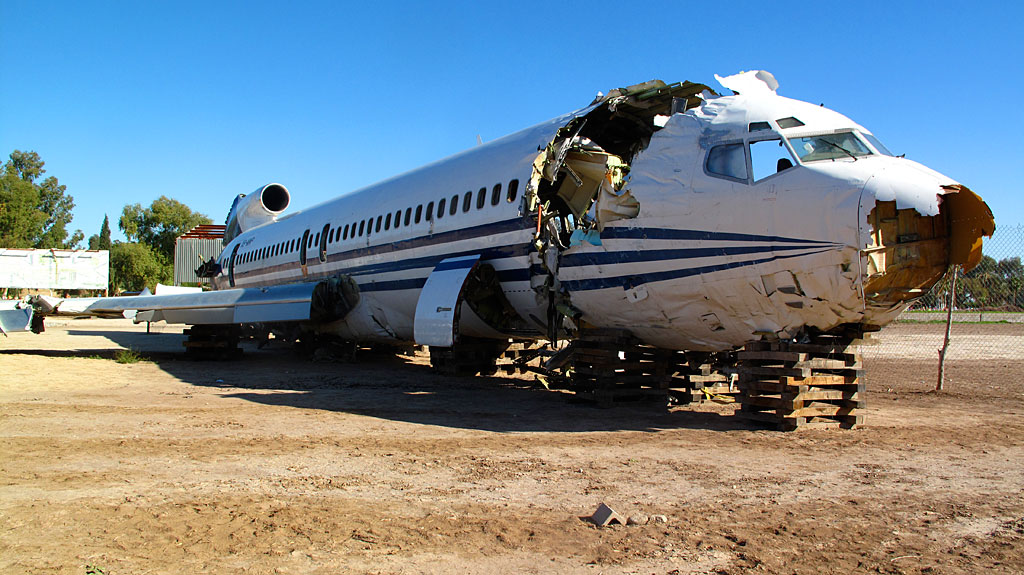 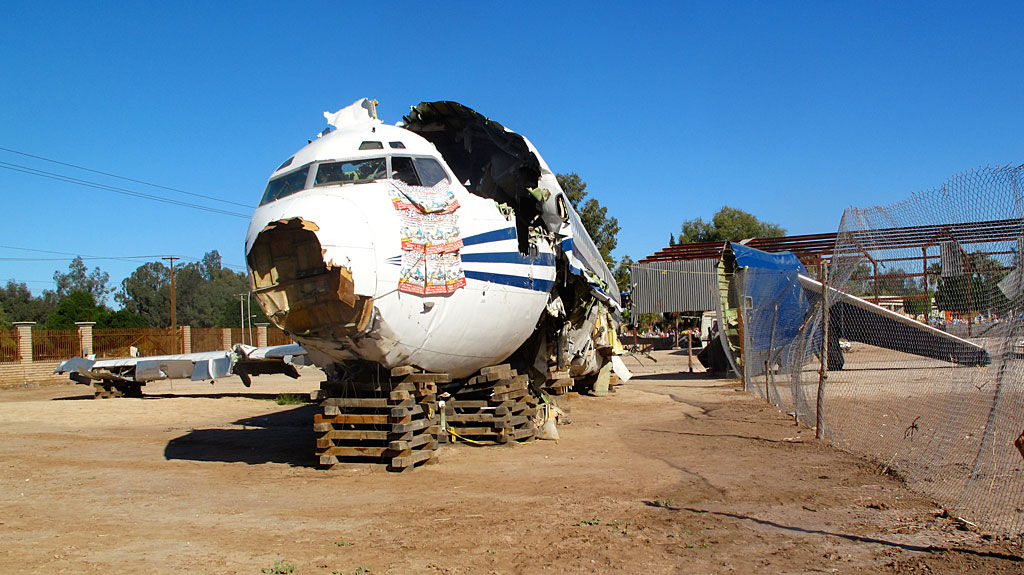 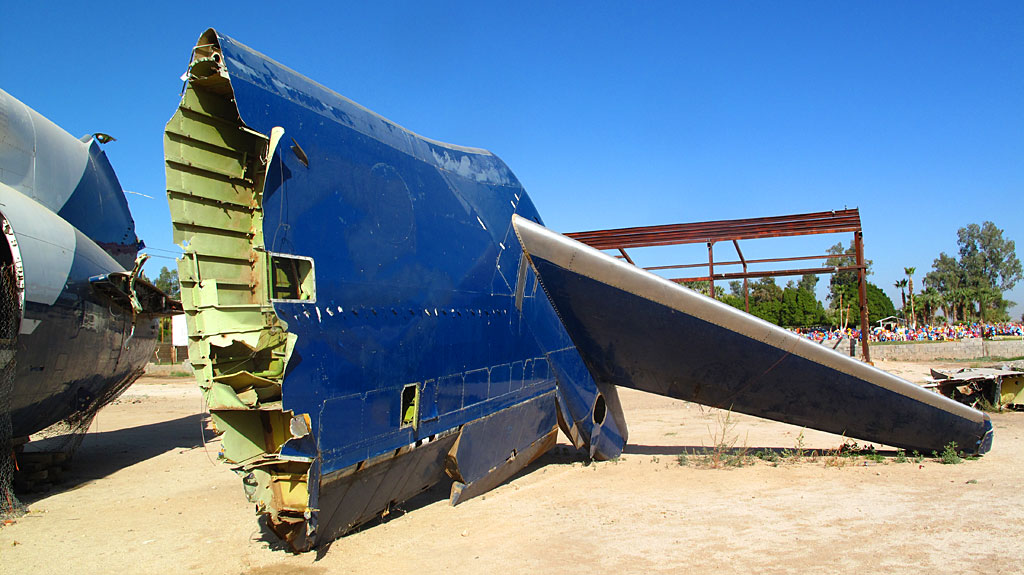 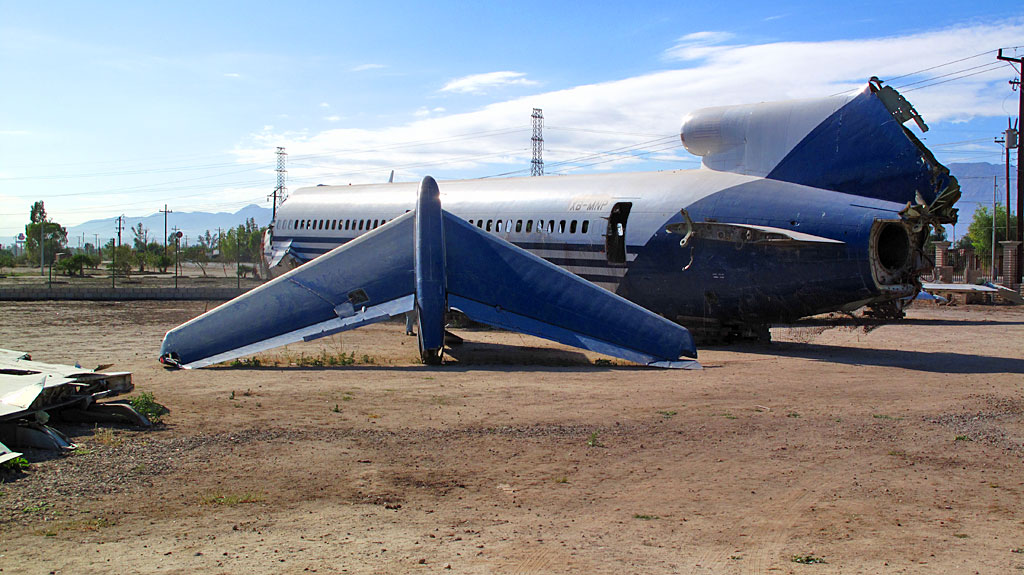 With the exception of one flat tire, the COPS Trophy Truck ran a flawless day, starting physically in the 24th position, and finishing 14th. The Class 10 car DNF’d 200 miles into the race with a blown tranny. 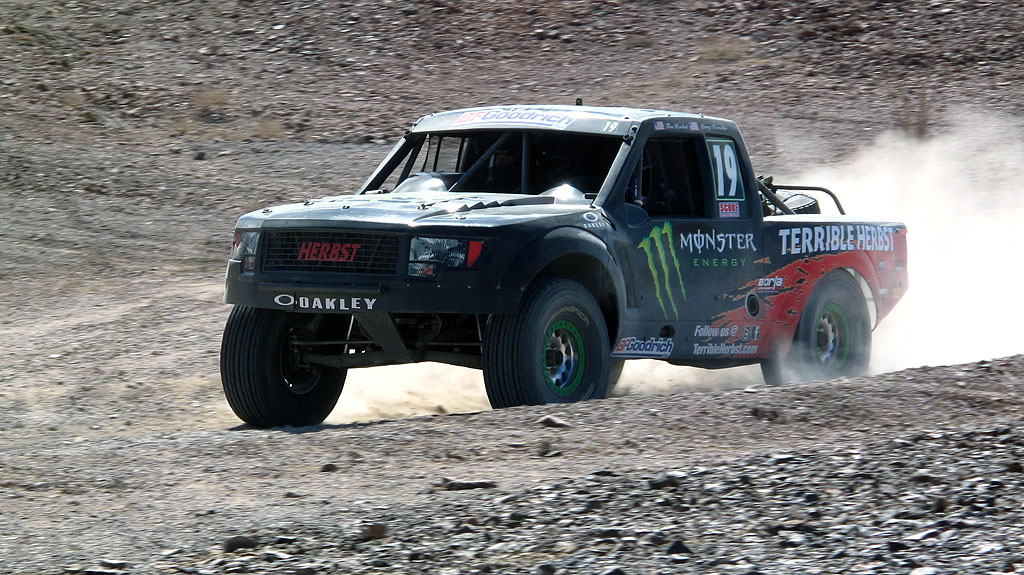 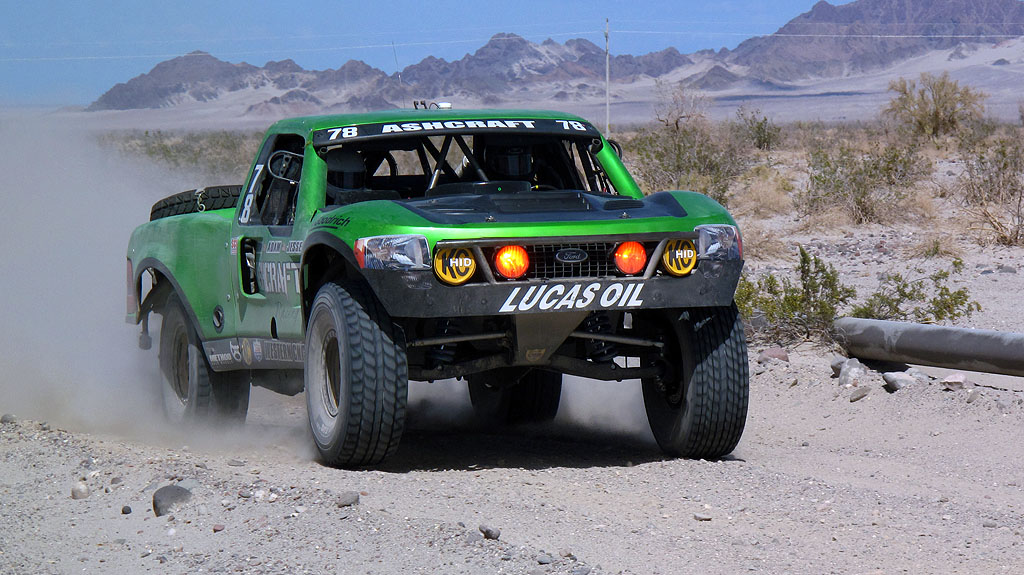 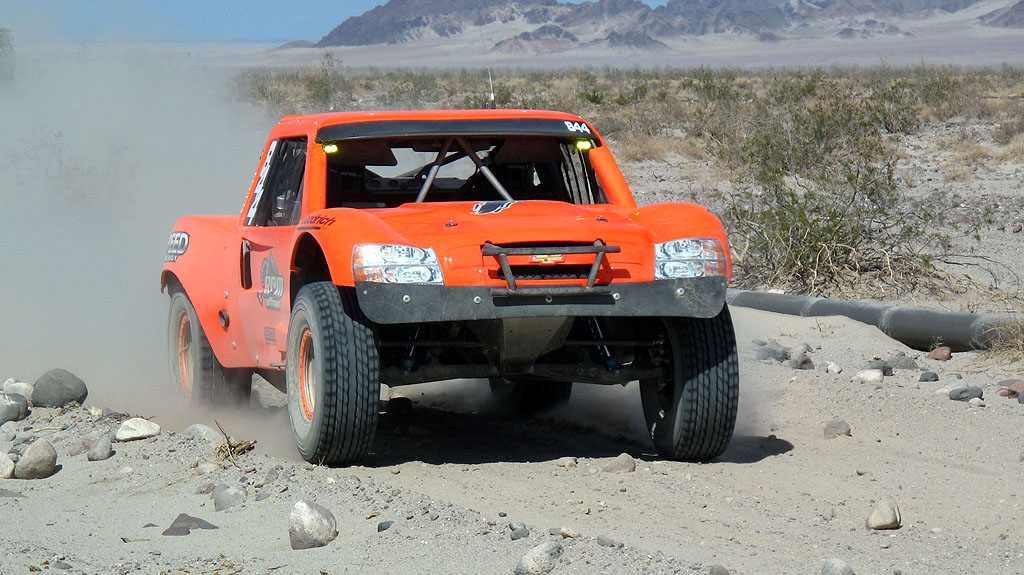 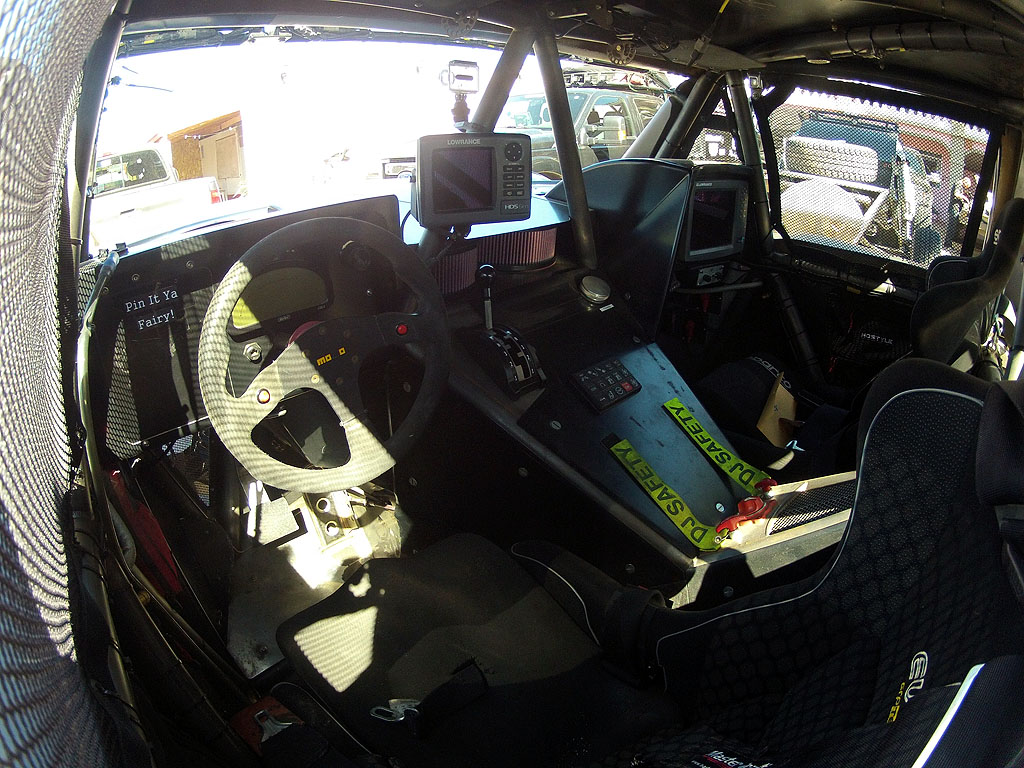 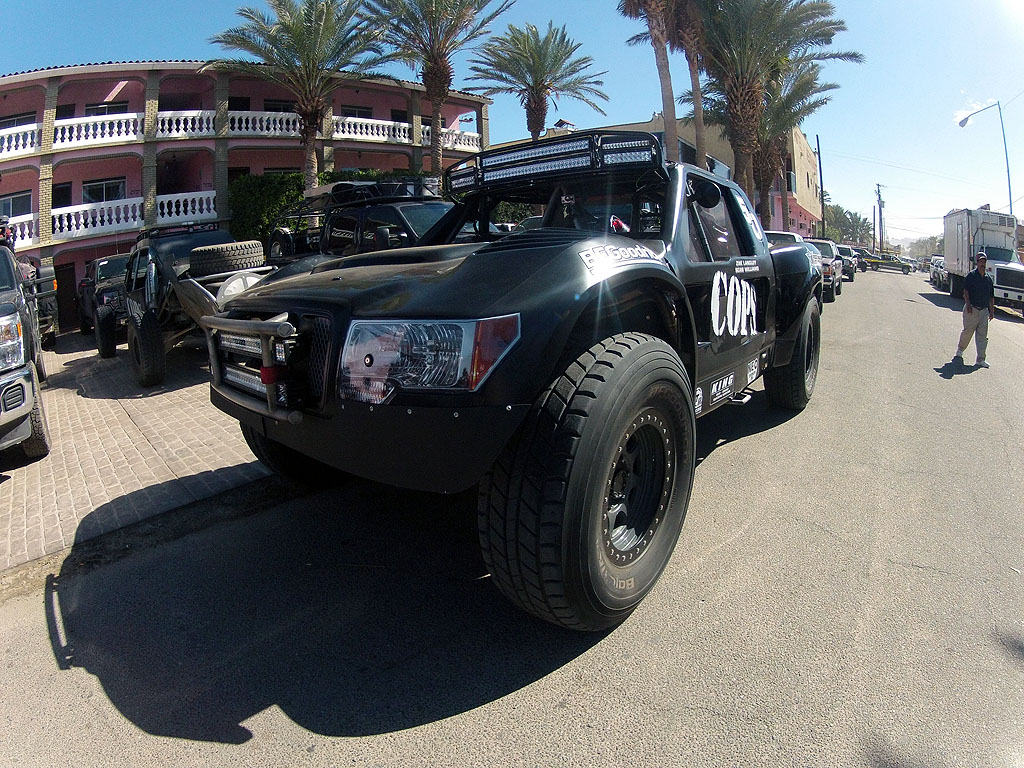 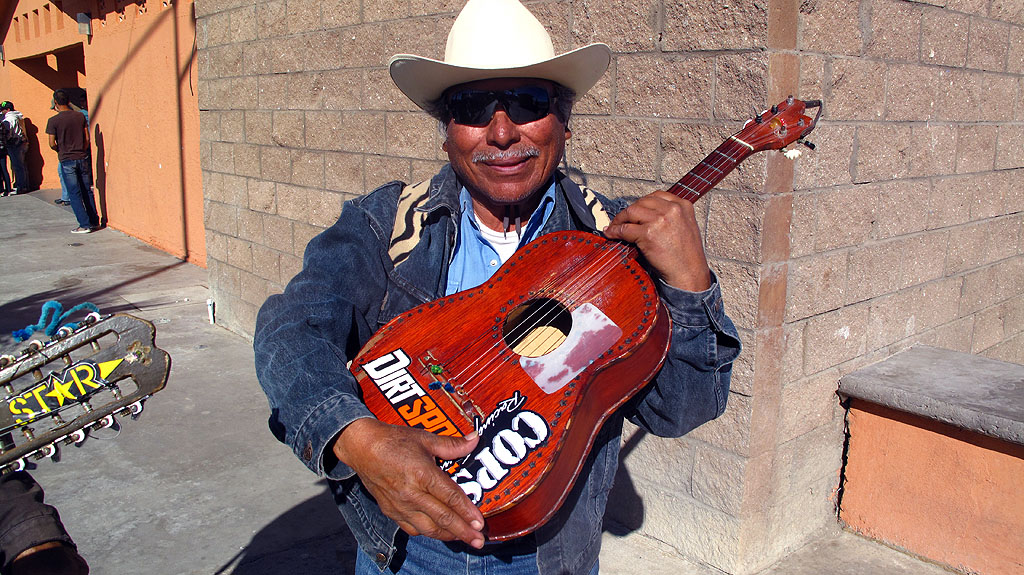 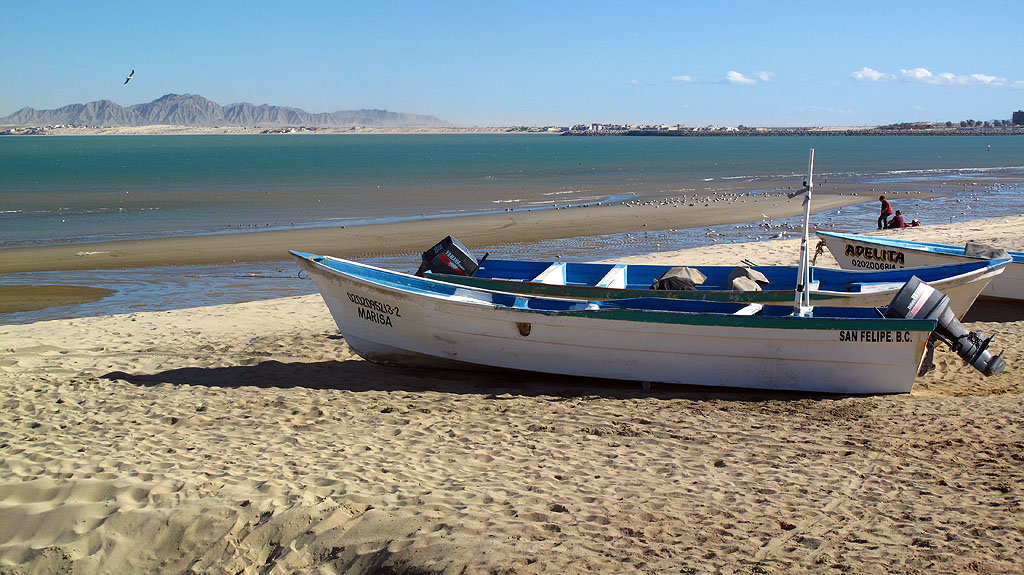 This is a collection of random Baja photos taken the days before and after the 1000. Photos were taken in Loreto, Bahía Concepción, the beaches around Ligui, and along Highway 1. 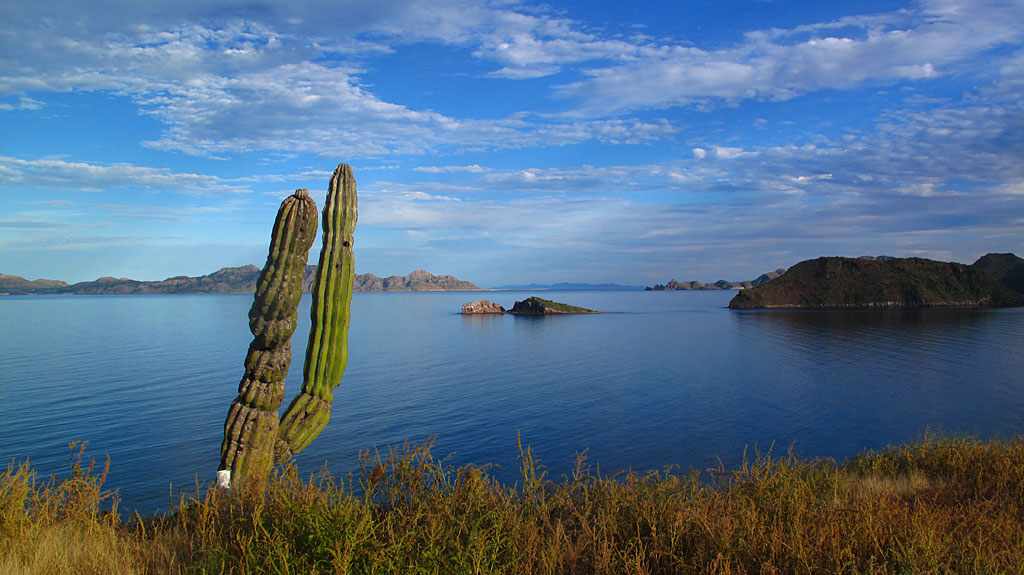 The Baja 1000 was not kind to COPS Racing. The Class 1 car, driven by Morgan Langley, made it about 250 miles before the tired torque converter gave up the ghost. The Trophy Truck lost two engine cylinders near Loreto (RM850), but after several hours of down-time tinkering, Dan Martin managed to limp the truck to RM975 where it DNF’d. The combination of a hill and a silt bed near Punta Conejo sucked the remaining life out of the engine.