We’ve been unintentionally staying at all the little towns which line California Highway 395 on the eastern side of the Sierras. Over the Martin Luther King holiday, we adopted Independence as our temporary home, a town which has been around since 1861. As always, our basic MO will be wandering, exploring and maximizing fun.

Nine days to kill in the Eastern Sierra — what a great problem to have.

Of course there was the usual mountain biking, most likely relegated to Lower Rock Creek or other non-Mammoth Mountain locations. We wandered into the eastern side of Yosemite Park a couple days, and also hit a lot of other trails and creeks and lakes. We made one unsuccessful trip to Laurel Lakes.

As always, we got to see and experience lots of cool new things.

Time to take Dennis to Laurel Lakes — he’s never been there.

The 10-mile out-and-back road starts a little south of Mammoth Lakes in the Eastern Sierras and climbs 2,700′, topping out a little over 10,000′. We were hoping to make our destination, but given the amount of snow the area received that winter, failure was a distinct possibility.

The Pacific Crest Trail runs 2,650 miles from Mexico to Canada, climbing over 57 major mountain passes, 19 major canyons, and along the shores of more than 1,000 lakes. Elevation gained over the length of the trail is 489,418′ — that works out to a little more than 92 vertical miles.

We seem to bump into the PCT – always by accident. This time Carol and I hiked on California Section I (Tuolumne Meadow to Sonora Pass), following the Tuolumne River downstream to Glen Aulin High Sierra Camp – a round trip of about 11 miles.

“Miners, gamblers and business continued to flood the area and by 1879, Bodie boasted a population of about 10,000 and 2,000 buildings. Before long the town supported some 30 gold mines, 65 saloons, numerous brothels, gambling halls, and opium dens, as well, as a number of legitimate businesses, including three newspapers, several churches, a couple of banks and a school. Every other building on the mile long main street was a saloon. Three breweries worked day and night, while whiskey was brought into town in 100 gallon barrels.

“Like many booming mining camps, Bodie soon earned a reputation for violence and lawlessness. Killings were sometimes daily events and robberies, stage holdups and street fights were common occurrences in the camp.

“In its day, Bodie was more widely known for its lawlessness than for its riches. Of Bodie, the Reverend F.M. Warrington would describe it in 1881 as ‘a sea of sin, lashed by the tempests of lust and passion.'” — Legends of America

The Log Cabin Mine is located at 9,600‘ in the Eastern Sierra Nevadas above the town of Lee Vining. The state-of-the-art mine was opened in 1910 and could extract and process the gold from the quartz ore, making it one of the highest-producing mines in California. The mine operated for around 30 years but was closed due to the War Production Board order L-208, shutting down all nonessential gold mines in the United States. An attempt was made to reopen the mine in the 1950s but was not successful. In 1971, the mine was turned over to the government and is currently preserved as a historical site. Today, the mine is flooded around 200 feet below the surface.

Memorial Day weekend in the Alabama Hills on the eastern side of the Sierras. And nowhere near Alabama. I’d call that a stout win-win. 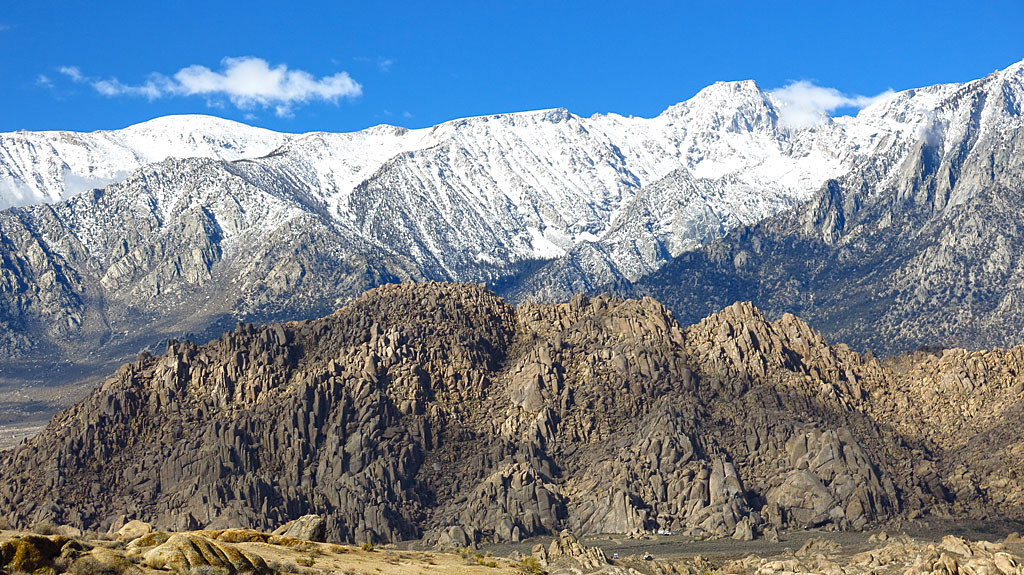 Two back-to-back weekends in the Eastern Sierras, with base camp at Mammoth Lakes.

The purpose of the first weekend was to attend the 2014 Kamikaze Mountain Bike Games, which were fast and fun and furious. The second weekend included riding Lower Rock Creek, Rock Creek Lake, Tom’s Place, and Saddlebag Lake; in Yosemite we hiked Mays Lake and Tuolumne Meadows on the east side of the Park.

Dual downhill slalom at the Canyon Lodge at Mammoth Mountain. Grab and drag the photosphere to look around! Oh my Gawd, the guy with the red shirt doesn’t have any legs!

A photo sphere from the roof of the Canyon Lodge.

A photo sphere of autumn color from above Rock Creek Lake. Take a look around.

Carol stands in the middle of a low-flow Tuolumne River in Yosemite.

This photo sphere was taken near the bottom of the Kamikaze Downhill race on a particularly rocky, nasty high-speed turn. Click and drag the photo sphere to look around.

Ten photo spheres from around the Owens Valley – treat them as if you were using Google Street View. Click and hold and drag the mouse to look around, up and down. Go advanced and zoom in and out. Or go big with full-screen mode.

The Cerro Gordo Ghost Town, American Hotel – 700 mines in the Cerro Gordo district searched for silver, lead and zinc ore – rough business considering the remote location. The mines were located at 8,000′ in the Inyo Mountains on the west side of Death Valley National Park.

The Salt Tram – The Salt Tram at the top of the Inyo Mountains. The tram was built around 100 years ago to transport salt from the Saline Valley, over the mountains, and down to Owens Lake for distribution.

Horseshoe Meadows Road – Carol, Rick and I stopped to take in the view of Owens Valley. Below us are the switchbacks we used to climb the hill. 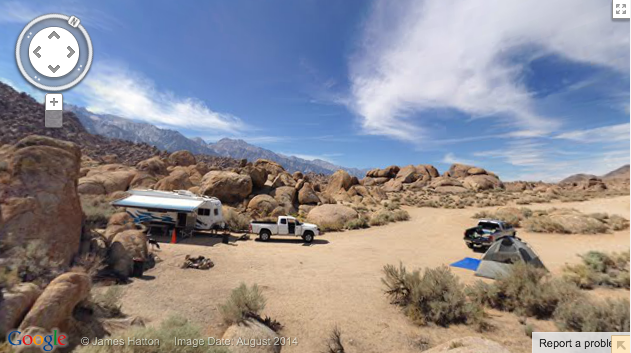 Breaking out of our regular routine, Carol and I decided to head to the Alabama Hills in the Eastern Sierras for Memorial Day weekend. The plan was to base-camp in the rock hills, and wander and explore the area. Even though it was Memorial weekend, we were still able to hunker in and hide from the tourists.